While escape rooms are now commonplace across the UK, this wasn’t always the case. Originating in Japan and gaining popularity first elsewhere in Europe, escape rooms started popping up in the UK almost a decade ago. Before the escape room boom, Enigma Quests set up shop in central London, offering players a twist on the standard format and the opportunity to immerse themselves in another world. Since their first quest started, giving customers the chance to graduate from the School of Witchcraft and Wizardry, they’ve gone from strength to strength and now offer a range of immersive quest experiences. Despite there now being around 1,500 escape rooms in the UK, their imaginatively designed, highly detailed games have earned Enigma Quests a firm place in TripAdvisor’s top five escape room games in London.

We were briefed with creating a promotional website with a bespoke game booking system, as well as designing the Enigma Quests logo and colour scheme.

The biggest challenge was creating a booking system which was both easy for customers to use and easy for administrators to manage. It needed to very clear and customers needed to be able to book in real-time, viewing available slots both on the day and far in advance. It had to allow for booking to be flexible for customers and for it to be easy for admins to see what’s been booked. As Enigma Quests were a start up which would grow very quickly, the site needed to allow for that growth without having to rely on intervention from us. 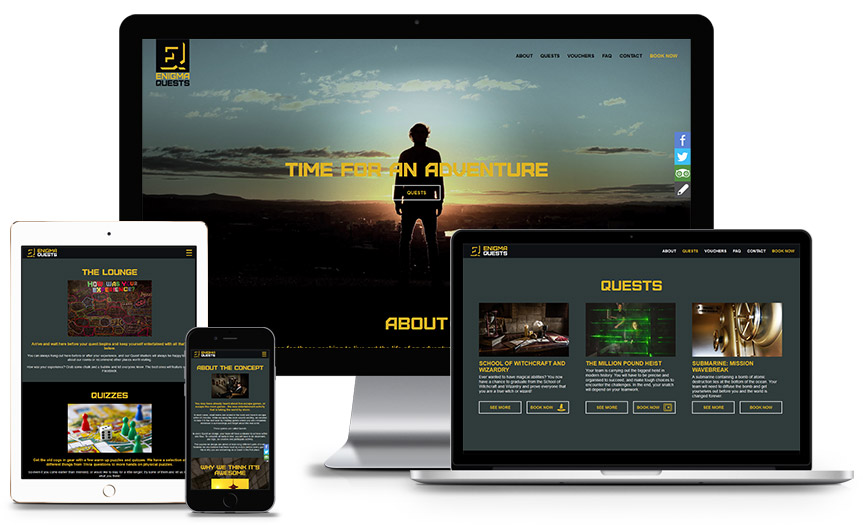 We started with designing the Enigma Quest logo, working collaboratively with the client to create a combination of the initials of the company combined with the style of a maze / puzzle. The client chose a bold colourway which would stand out and give a pop of colour.

We approached the challenge of creating a bespoke real-time booking system with the priority of making it clean, clear and easy to navigate. It needed to be intuitive so that it was obvious to customers what was available and when and that information needed to be up to date all the time without manual intervention. The information which drove the real-time booking element started with the initial set up of the room schedule. For Enigma Quests, this meant allowing them to set up flexible session slots from the admin to allow for the weekly game schedule to vary and for there to be ‘special days’ where different details such as varying rates or game closure could be applied. Promo codes can be created easily and customers can also buy gift vouchers directly from the site. The site is also scalable, to allow Enigma Quests to add more and more immersive quest experiences to the site as and when they’re available.

Companies we have developed software for:

Have a project to discuss?

Fill out the short form on our Contact Us page or give us a call directly on +44 (0) 20 3855 0690. We’ll guide you through our process, advise on the best possible solutions and steer you in the right direction.

Contact Us
Page load link
We use cookies on our website to give you the most relevant experience by remembering your preferences and repeat visits. By clicking “Accept All”, you consent to the use of ALL the cookies. However, you may visit "Cookie Settings" to provide a controlled consent.
Cookie SettingsAccept All
Manage consent

This website uses cookies to improve your experience while you navigate through the website. Out of these, the cookies that are categorized as necessary are stored on your browser as they are essential for the working of basic functionalities of the website. We also use third-party cookies that help us analyze and understand how you use this website. These cookies will be stored in your browser only with your consent. You also have the option to opt-out of these cookies. But opting out of some of these cookies may affect your browsing experience.
Necessary Always Enabled
Necessary cookies are absolutely essential for the website to function properly. These cookies ensure basic functionalities and security features of the website, anonymously.
Functional
Functional cookies help to perform certain functionalities like sharing the content of the website on social media platforms, collect feedbacks, and other third-party features.
Performance
Performance cookies are used to understand and analyze the key performance indexes of the website which helps in delivering a better user experience for the visitors.
Analytics
Analytical cookies are used to understand how visitors interact with the website. These cookies help provide information on metrics the number of visitors, bounce rate, traffic source, etc.
Advertisement
Advertisement cookies are used to provide visitors with relevant ads and marketing campaigns. These cookies track visitors across websites and collect information to provide customized ads.
Others
Other uncategorized cookies are those that are being analyzed and have not been classified into a category as yet.
SAVE & ACCEPT
Go to Top